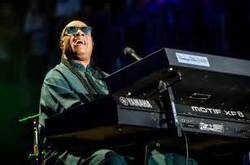 Stevie Wonder is an American composer, pianist, singer, songwriter, Record producer, and multi-instrumentalist. He was born as Stevland Hardaway Morris on May 13th, 1950 but is better known by his stage name of Stevie Wonder.
He is a child prodigy and is known as one of the most successful musical performers of the late 20th Century.  He sings Motown, pop, Jazz, Soul, R&B and was a huge influence in the Motown movement.
When he was 11 years old he was signed to a record label and continues to do music today. He has recorded more than 30 U.S. top ten hits and has 25 Grammy's to date.  He was been blind since shortly after birth.
Some of his hits include Superstitious, I Just Called to Say I Love You, Sir Duke, Higher Ground, Signed, Sealed, Delivered I'm Yours, and many others.
His website can be found by clicking here...