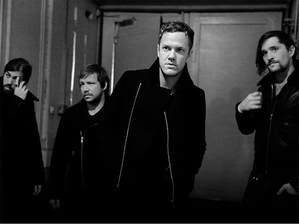 Imagine Dragons is a pop rock band from Las Vegas, Nevada, United States. Band members include Dan Reynolds (vocals), Wayne Sermon (Lead Guitar), Ben McKee (Bass) and Daniel Platzman (Drums).
​
Their 1st single It's Time was from their debut album Night Visions ​was a chart topping album. From this album single such as Radioactive and Demons also were hits. Because of this,  Billboard placed them at the top of their "Year In Rock" rankings for 2013 and 2017. They also were named the Breakthrough Band of 2013 and were the Biggest Band of 2017.

Their latest album Evolve has such hits as Believer, Thunder and Whatever it Takes.
The band has won countless awards including American Music Awards, Billboard Music Awards, Top Artist of the Year, Grammy Awards, World Music Awards and more.
Their Website can be by clicking here...