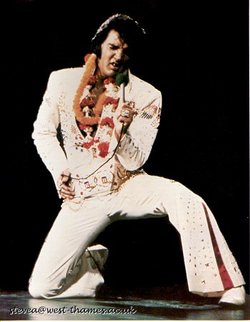 Elvis Presley was born on January 8th, 1935 in Tupelo, Mississippi.  He was known as the King of Rock and Roll or "the King" and was a huge cultural icon in fashion and music in the 20th century.
He played rock and roll, country and rhythm & blues and even was a pioneer of a style of music called Rockabilly that combines country and rhythm and blues.

He was well known for shaking his hips and pelvic area, which at the time, caused TV stations to video tape him from the waist up.

He collected cars, and loved wearing jumpsuits, each having a theme.

Did you know that there are over 8000 Elvis Impersonators in the world?