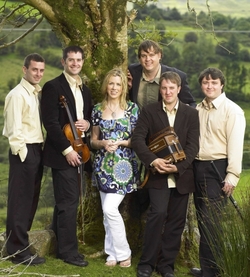 Danú is an Irish Traditional group that perform Celtic music.

The founding members of Danú  are Donnchadh Gough, Dónal Clancy, Daire Bracken, and Benny McCarthy and they met in Waterford in Ireland in 1994.

They have travelled all over the world and theyare the only band to have been voted Best Traditional Group twice in the  BBC Radio 2 Folk Awards.