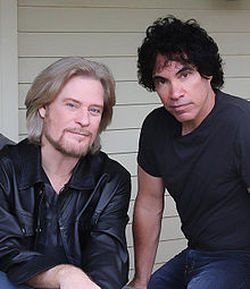 Hall & Oates is an American musical group from Philadelphia, United States.  The groups members are Daryl Hall and John Oates with Hall is lead singer and Oates electric guitar and backing vocals.  They both have written most of their songs and were famous in the late 1970's and 1980's. They perform rock and roll, blue-eyed soul, soft rock, jazz, and also rhythm and blues. In 2003, Hall and Oates were inducted into the Songwriter Hall of Fame.