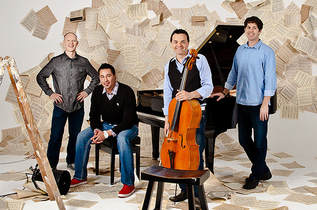 The Piano Guys are an American musical group from Utah, United States. They consist of John Schmidt (piano), Steven Sharp Nelson (Cello), Paul Anderson (Videographer) and and Al Van Der Beek (Producer).
They began in 2010 posting videos to You-Tube, as a social media strategy to help Anderson's piano store. Soon after, the group gained popularity on You Tube and currently has over 5 million followers on You Tube and over 1 billion view on their YouTube channel.
The group combines classical, contemporary, and rock and roll music and has appeared on many charts including the Billboard charts. They have also won YouTube awards.
Since then, the group is constantly touring and Anderson has sold his piano store. Their current goal is to perform at all 7 Wonders of the World and have currently performed on 4!
Their website can be found by going here.....
​