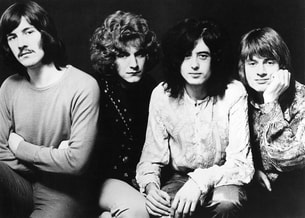 Led Zepplin is a rock band formed in London, England in 1968.  Members are Jimmy Page (guitar), Robert Plant (singer), John Paul Jones (Bass and keyboard) and John Bonham (Drums).
They played genres such as hard rock, blues rock, folk rock, and are considered to be one of the first heavy metal bands.  Through their increased experimentation in music, innovation, and creative drum sounds, the band is considered one of the best-selling music artists in the history of recording and the second best selling band in the U.S. The
Their first large hit was Stairway to Heaven which recognized their popularity all over the world!