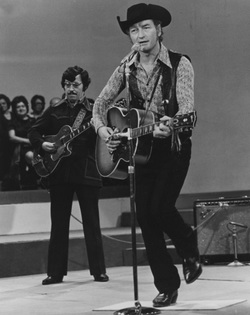 Stompin' Tom Connors is a Canadian Country and Folk singer/songwriter and a Canadian Icon.  Born as Charles Thomas Connors, in Saint John, New Brunswick Canada, he wrote songs focusing on Canada such as Sudbury Saturday Night, Bud the Spud, The Hockey Song, and many many more.

He later was adopted by a couple from Skinner's Pond, Prince Edward Island.  When he was 13 he ran away from home with the clothes he had on his back and his guitar.  This lasted 13 years.

He got his name because he stomped to "keep the beat," not knowing he was stomping on the back beat or on the "and" part of the beat. He carried a piece of plywood everywhere's he went because he would often stomp through stage floors.

He wrote more than 300 songs, and released many albums. He always was seen wearing a black, stetson hat. He also is the author of two books Stompin' Tom: Before the Fame and The Connors Tone.

"I heard some people comment..., saying there'll never be another Stompin' Tom. Well, I got news for you. We still have a Canada, and we still have the roads, towns, people, jobs -- and that's what Tom wrote about. So never say never.... He never liked anyone copying him, but anyone who wants to sing about Canada, keep 'er on going." --Tom Connors Jr.

His website can be found by clicking here...
Stompin' Tom's Letter to his fans
Hello friends,
I want all my fans, past, present, or future, to know that without you, there would have not been any Stompin' Tom.
It was a long hard bumpy road, but this great country kept me inspired with its beauty, character, and spirit, driving me to keep marching on and devoted to sing about its people and places that make Canada the greatest country in the world.
I must now pass the torch, to all of you, to help keep the Maple Leaf flying high, and be the Patriot Canada needs now and in the future.
I humbly thank you all, one last time, for allowing me in your homes, I hope I continue to bring a little bit of cheer into your lives from the work I have done.
Sincerely,
Your Friend always,
Stompin' Tom Connors